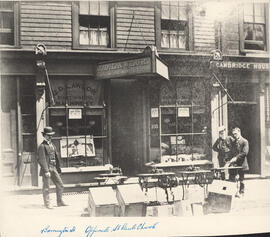 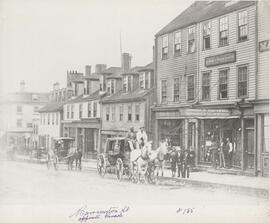 Photograph of Barrington St. opposite Parade

Item is a photograph of Barrington Street opposite the Grand Parade in the 19th century. The photograph shows several horse-drawn carriages passing in front of the storefronts, which include "Robert H. Cogswell, Watch Maker and Jeweller." 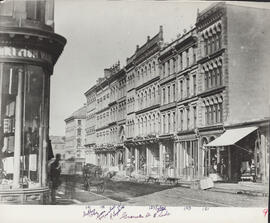 Item is a photograph of the south side of Granville Street in the 19th century. There are notes written in pen on the photograph with the names of the busnesses and their street numbers. 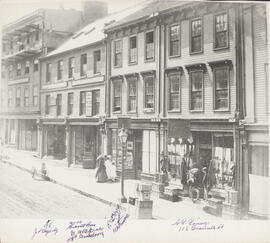 File contains reproductions of four photographs of Granville Street and Barrington Street. The photographs have notes written on them in pen.

Item is a leather-bound receipt book with receipts from 28 December 1820 to 30 July, 1822. Receipts are written by idividuals who received cash (pound sterling) from Matthew Richardson.

This fonds contains correspondence, agreements, price lists, financial records and photographs relating to the J.E. Morse Tea company. Also contains a picture of the Studley Quoit Club plus a key to the group picture.

The George E. Smith Company, named after its founder, was a hardware company in Halifax, Nova Scotia. Upon Smith's death on February 16, 1916, the company remained in operation. The fonds includes the correspondence (including financial transactions) with suppliers and credit reports commissioned by the company concerning their clientele. The collection illuminates the hardships for Canadian companies prior to and during World War I.

This series consists of the business correspondence retained by the Halifax Seed Company.