File contains five copies of letterhead from the Bill Lynch Shows. The letterhead lists William P. Lynch as the President and Manager, along with his photo, and Halifax as their permanent address. Script at the bottom reads "One train load of clean outdoor amusement."

Correspondence from Corning and Chipman

Prospectus and reports of the Montreal and Pictou Coal Company

File contains a prospectus and two reports of the Montreal and Pictou Coal Company.

This fonds comprises three property deeds between George and/or Frank Lewis, of J. Lewis and Sons, and other parties. 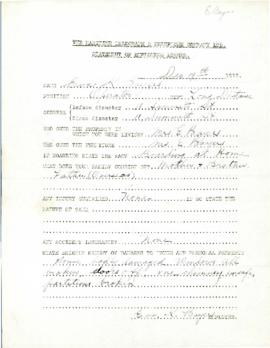 File contains a business ledger of Londonderry Stoves Company. The ledger includes entries from 1889-1895. File also contains miscellaneous papers. Each item has been marked to indicate where it was found.