"100 Years at Law: Dalhousie Gears up for its big birthday bash" - Atlantic Insight

List of feminist services and organizations in Halifax, guide re. women and the law

File contains a list of feminist services and organizations in Halifax, and a guide for women about the law.

File contains a training document on providing legal information and pamphlets regarding the rights of individuals.

File contains handwritten notes, partially in shorthand, written on lined loose leaf paper. The notes appear to be about court proceedings. The file also includes a report of the trial magistrate from the trial of Lorne Edward Pace, who stole a cake that belonged to the Government of Canada in 1964, and a county court docket from September 1964. 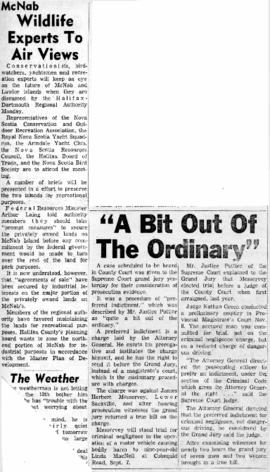 Item is a newspaper clipping from an unknown newspaper that contains two short articles. The first article is called "McNab: WIldlife Esperts To Air Views" and is about decisions related to the recreational use of McNab's Island. The second article is called "'A Bit Out Of The Ordinary'" and is about a court case against James Herbert Messervey that was sent to the Supreme Court. There is no author named for either article.

Notes about the Warner case

File contains six spiral bound stenographer's notebooks containing handwritten notes about the Warner case. Some of the notes are written in shorthand.

Legal anomalies and women before the law : [draft of paper]

File contains a draft of a paper called "Legal Anomalies and Women Before the Law" by Barbara Hinds. The draft is typed with handwritten corrections.

Understanding the law : a guide for women in Nova Scotia

Fonds consists of materials regarding John Willis' career as a law professor, including his notes on equity, tax income law, wills and trusts, and others subjects. Fonds also contains a manuscript and books with handwritten annotations possibly written by John Willis.

John Willis' research notes on the jurisdiction and conflict of law

File contains a book published by the Sweet & Maxwell Ltd. The book has a handwritten dedication by G.S.A. Wheatcroft to John Willis.

Report on salaries and training of articled clerks in Canada, prepared for the Dalhousie Law Students' Society

File contains the "Report on Salaries and training of articled clerks in Canada" prepared for the Dalhousie Law Students' Society by John L. Harris, third year law student, in March 1966.

Judge Peter O'Hearn's records regarding the Canadian Committee on Corrections

A case for abolition of the status of illegitimacy / Lilias M. Toward : [typescript]

Draft amendment to rules 1, 3 ad 7a of order XLIII : attachment of debts

Letter sent by Arthur J. Meagher to Judge Peter O'Hearn regarding the practice of legal defence in Nova Scotia