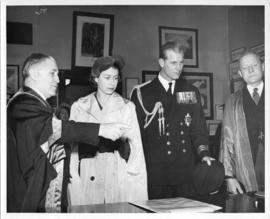 Photograph of Dr. Kerr, Princess Elizabeth, the Duke of Edinburgh, and Colonel Laurie

Item is a photograph taken during Princess Elizabeth and the Duke of Edinburgh's visit to Dalhousie University. 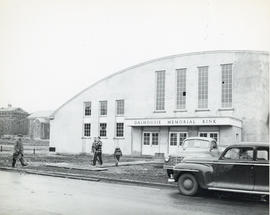 Photograph of the exterior of Dalhousie Memorial Rink

Item is a photograph of the entrance of Dalhousie Memorial Rink.

This file contains "Sanger recognizes obscure poetic figure". It is a printout of an online news article from the Halifax Herald Limited. By Bruce Erskine. July 3 2005. The article discusses a new book by retired Nova Scotia Agricultural College professor and archivist Peter Sanger. White Salt Mountain is a detailed account of the life of Florence Ayscough, the daughter of a Nova Scotia-born businessman Thomas Wheelock who made his fortune in Shanghai where Ayscough was born in 1875. The book then links her life with that of late New Brunswick poet John Thompson (1936-1976) who’s poems, Sanger argues, were greatly influenced by Ayscough’s translated poems from Chinese.