A clipping from the NSSLA Bulletin containing a letter from Barkhouse

A. Keith and Son's accident in the Engine room in January 1948

This file consists of an article in the Halifax Mail, statements given from individuals that where present during the explosion and 4 photographs of the engine room after the accident.

A newspaper clipping regarding a visit to Digby

A newspaper clipping regarding the launch of The Lorenzen Collection

A newspaper clippings regarding a school visit

File consists of a book review entitled "A North-South Cultural Exchange" by Budge Wilson, a review of her trip to Mexico, in Children's Book News (Fall, 1998).

About the authors : notes across the aisle

File contains a copy of the biographies of authors in "Notes Across the Aisle," edited by Peter Carver and published y Thistledown Press Ltd., including Budge Wilson, who contributed the short story "My War." 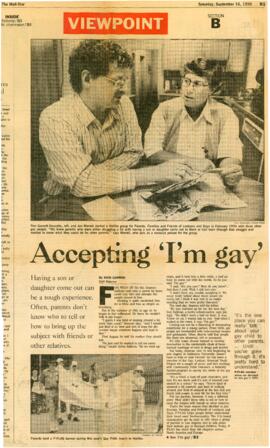 Advertisement for Before Green Gables in Quill and Quire

Advertisement for Before Green Gables in the Atlantic summer reading guide

Advertisements and reviews of Fractures

Advertisements and reviews of The Leaving

Advertisements and reviews of The Long Wait

Advertisements for A House far from Home

Advertisements for Duff the Giant Killer

Advertisements for Mothers and Other Strangers

Advertisements for The Cat that Barked

Advertisements for The Christmas that Almost Wasn't

Advertisements for The Courtship

Advertisements for The Fear of Angelina Domino

Fonds contains materials collected by Al Stewart primarily through his involvement in the Maritime leather community and LGBT advocacy work at Saint John's United Church in Halifax. Leather community records include administrative records, photographs, promotional materials, correspondence, newsletters, and catalogues associated with the TightRope leather brotherhood, which operated in Halifax from the early 90s to 2007, Mr. Atlantic Canada [M.A.C.] Leather contests, and other leather groups across Canada and the United States. United Church materials include reference materials regarding homosexuality and religion, reference materials regarding Affirm United and the Affirming Ministries Program, correspondence, and newsletters. Fonds also contains objects and ephemera related to the leather community, Affirm, and Stewart's membership in the Nova Scotia Government and General Employees Union [NSGEU], as well as personal photographs, correspondence, and LGBT publications.

Alan Ruffman's newspaper clippings regarding the Canadian economy and science