Fonds contains off-prints of Lawson's papers (1854-1894), a handwritten catalogue of Lawson's library, handwritten botanical observations (1891), a published program of a course of botany lectures, published testimonials (1874), and an o...

Fonds consists of materials created and accumulated by Wilfrid Creighton, including correspondence, articles, manuscripts, financial and legal documents, minutes, photographs and a variety of personal papers and memorabilia. Materials relate to Cr...

The Joyce Barkhouse fonds consists of published and unpublished manuscripts of books, short stories, articles, and other writings, as well as photocopies and clippings of published materials, personal and professional correspondence, photographs, ...

The fonds includes manuscripts of most of his published works—novels, short stories, articles, radio broadcasts and plays, and forewords for other works—from 1929 to 1976; research notes and general historical studies; sound recordings; correspond...

Item is a manuscript of "Hid Treasure, or The Labours of a Deacon and Other Poems" dated April 29, 1919, which is possibly when the pages were taped into the bound scrapbook with the title embossed on the spine. A contents page lists bot...

Fonds consists of correspondence with the Canadian Medical Association and its professional journal. Other contents include manuscripts of papers and addresses, including publications by Dr. Hattie. Fonds also contains obituaries, a letter from Se...

Fonds consists of materials created and collected by Andrew Merkel. The fonds contains correspondence to and from friends and associates, including Charles Bruce, Kenneth Leslie, and Robert Norwood; manuscripts of articles, poems, and plays; Atlan... 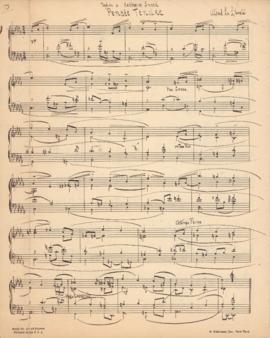 File contains Logan's manuscript for "Preludes: Sonnets and Other Verses," dedicated to Elizabeth Gordon Logan. The manuscript includes "An Epistle in Criticism" and and essay, "The Rhythmical Dummy" in addition ...

Fonds consists of research notes and materials on the history of Nova Scotia and, more specifically, Liverpool and its prominent families, including family trees and hand-drawn annotated maps. Also included are many manuscripts on a variety of top...

Fonds consists of fiction, non-fiction and poetry manuscripts, a notebook, leaflets and periodicals, newspaper clippings, and a hardcover copy of The Growing Question, a gardening book published by Fillmore in 1957. Materials relate to Fillmore...

File contains the sheet music for Edith J. Archibald's "God Bless Our Canada" and a manuscript version of the English lyrics for the anthem by Archibald. The song is written in F Major for four-voice chorus (soprano, alto, tenor, an... 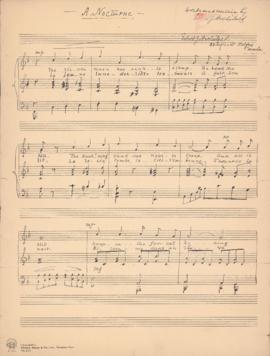 File contains an undated typed manuscript entitled "The social aspect of the idea of truth and reality", presumably written in 1915, by Kenneth Leslie, when he was a student at Harvard University. File addresses Leslie's notions of ... 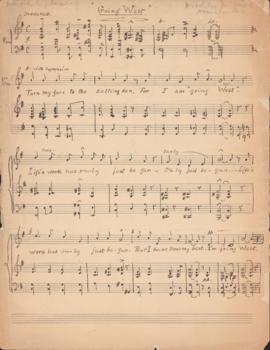 The continuity between instinct and intelligence : [typed manuscript]

File contains a typed manuscript of an essay entitled "The continuity between instinct and intelligence", written by Kenneth Leslie while he was a student at Harvard University, likely in 1915. File also contains handwritten notes and re... 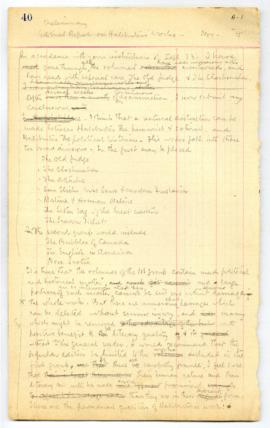 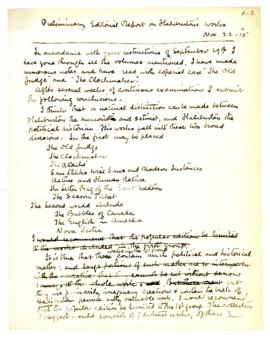 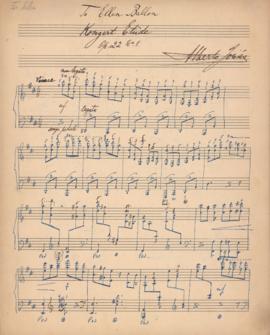 Item is the original score inscribed to Ellen Ballon by Alberto Jonas. Ballon was one of Jonás' students in New York from c. 1916 until 1925. 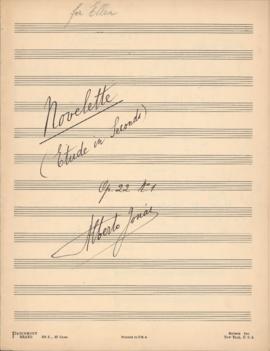 File contains the manuscript for Alberto Jonàs' "Novelette" for piano, which he wrote for Ellen Ballon. Ballon was one of his students in New York from c. 1916 until 1925.