Part of Sons of Temperance, Chester Division No. 32 fonds

Part of Sons of Temperance, Chester Division No. 32 fonds

Minute book of the Sons of Temperance, Rock Division

Item is a minute book of the Sons of Temperance, Rock Division, in Maitland, Nova Scotia.

Minute book of the Sons of Temperance, Wallace Bridge Division No. 792

File contains the Wallace Bridge Division's (No. 792) minute book with minutes of meetings held between 1899 and 1903. File also includes a quarterly report from 1898.

This file contains 1 book containing the annual meeting minutes of the Nova Scotia Poultry and Pet Stock Association, with entries from 1913-1933. Notes were handwritten from 1913 to 1920, where entries from 1921 onward were typed entries that were glued onto the book pages.

This file contains 1 textual record, comprised of minutes of the 22nd annual meeting of the Nova Scotia Poultry Association in 1934. Notes were taken by JP Landry, Association Secretary.

This file contains 1 textual record, comprised of minutes of the 23rd annual meeting of the Nova Scotia Poultry Association in 1935. Notes were taken by JP Landry, Association Secretary.

This file contains 1 textual record, comprised of minutes of the 24th annual meeting of the Nova Scotia Poultry Association in 1936. Notes were taken by JP Landry, Association Secretary.

Meetings of the Halifax branch of the Engineering Institute of Canada

Series consists of materials regarding the meetings of the Halifax branch of the Engineering Institute of Canada, including correspondence and minutes of meetings.

Fonds includes correspondence and the minute book of the Halifax Jewellers Association, 1948-1951.

Fonds consists of meeting minutes, a circular letter, and programs for productions of Dover Road and Blithe Spirit.

Fonds contains records about the National Radio Farm Forum, a national rural listening-discussion group project. Records relate to the operations of the Nova Scotia and New Brunswick regions and consist of pamphlets, scripts, correspondence, memos, newsletters, guides, National Secretaries report, annual reports from Nova Scotia and New Brunswick regions, and minutes from the regional and national meetings and conferences from 1937-1965. Also included is an account of the activity of the Earltown, Nova Scotia Farm Forum Radio Group from the period of 1961-1962.

File includes meeting minutes of the Family Law Committee, of which Judge Peter O'Hearn was a member. 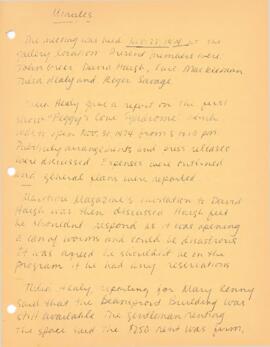 Item is handwritten set of minutes of the second meeting of the Board of Directors of Eye Level Gallery, held at an unknown location on November 28, 1974. Present members were John Greer, David Haigh, Karl MacKeeman, Julia Schmitt Healy, and Roger Savage. The lack of any non-artists meant the board did not have quorum according to the rules outlined in the minutes of the first meeting. Nevertheless, the board had a full meeting and made a number of decisions, including the approval of a Michael Fernandes show in January 1975. The board also expressed hope that the Nova Scotia Department of Recreation would "help solve" a budget deficit by providing funds. The membership's early interest in the documentation of the gallery's activities are reflected in the board's decision to photograph each show but not provide an honorarium to photographers. 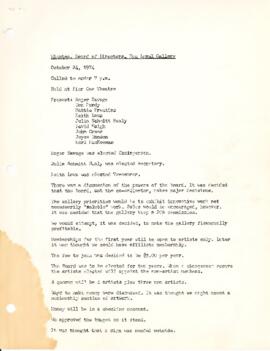 Item is typescript set of minutes of the first meeting of the Board of Directors of Eye Level Gallery, held at Pier One Theatre on October 24, 1974. Roger Savage was elected chairperson, Julia Schmitt Healy was elected secretary, and Keith Laws was elected treasurer. The decisions made at this meeting demonstrate the artists' forced struggle to manage the administrative and commercial aspects of operating an alternative gallery. The board decided that Healy would fill the salaried position of gallery coordinator even though she was also a sitting board member. The board also ensured that the artists on the board had more voting power than the non-artists who were there primarily to provide guidance on the administration of the gallery. But, in an effort to avoid conflicts regarding programming, the board also decided to make sitting members ineligible for one-person shows.

In terms of the commercial aspects of the gallery, the board decided that the gallery priorities "would be to exhibit innovative work not necessarily "saluble" work." The board also decided that "sales would be encouraged" and that they might "mount a membership auction of artwork." The board approved a Christmas-time show called "50 bucks and under" to provide an opportunity for members to sell works that would be affordable to consumers who might be shopping for Christmas presents. These decisions reflect an effort to balance the financial needs of members of the Eye Level Gallery Society with the membership's concerns regarding the commercialism of the mainstream art world.