File contains drafts of program notes, research notes, and programs for concerts containing music by Johann Sebastian Bach. The file is organized by type of music, including choral, instrumental, piano, solo violin and cello, concertos, and suites. Most of the program notes were written for concerts in Fredericton, with the exception of some notes from when Pugh was at Pembroke College in Cambridge, England. The file includes programs for performances at Christ Church Cathedral (Fredericton Chamber Players and Chamber Choir, directed by David Adams and Jeffrey Campbell); Wilmot United Church (Fredericton Choral Society and Chamber Orchestra, conducted by Douglas Hodgkinson); Edinburgh International Festival of Music and Drama (used for research, program notes not written by Pugh); and Memorial Hall, University of New Brunswick (Fredericton Chamber Orchestra conducted by Harrison Roper). The file also includes longer essays on the Saint Matthew Passion by Pugh.

File contains a paper presented during the ICES/SCOR symposium of the Joint Oceanography Assembly. The author is unknown.

File contains postcards sent from Joyce Barkhouse to her mother from London, England and Edinburgh, Scotland. 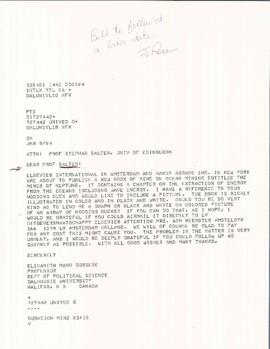 File contains correspondence with Stephen Salter (of the University of Edinburgh), Jürgen Sünder [?] Obren Stankovic, and A.D. Buzzalini of the Skelly Oil company.