Collection contains research materials gathered by Susan Horne who was head of the Home Economics / 4-H Branch of the Nova Scotia Department of Agriculture and Marketing. The records were used while she was writing "Home Economists in Agriculture 1913-1985." 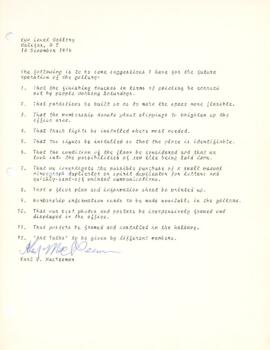 Item is a set of three suggestions for the Eye Level Gallery by Karl MacKeeman. It lists suggestions for the future operation of the gallery, a list of proposed exhibitions, and a 1976 calendar proposal that could plan all shows happening for the upcoming year. 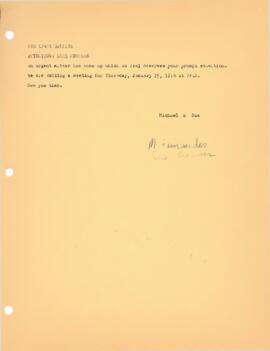 Item is a resignation letter from Sue Beaver from the Co-ordinator position and Ron Shuebrook from the Board of Directors and General Membership at Eye Level Gallery. Sue writes eight reasons for her resignation from the Co-ordinator position on January 15, 1976, which includes a lack of respect, unrealistic attitudes regarding money, lack of firm definitions and policies and practices which she regards as immoral and unethical. Ron writes in his letter from January 21, 1976 that there are many reasons for his resignation, which includes a lack of professionalism, a financial crisis of the gallery which was a result of unprofessional behaviour, and his move to Canning, Nova Scotia which left him feeling disconnected from the gallery.

Also included in the item is a letter to members of the Eye Level Gallery stating an urgent matter has come up and a meeting needed to happen on January 15, 1976 at Eye Level by Michael Fernandes and Sue Beaver. A letter addressed to Sue Beaver from Brenda Wallace, the Visual Arts Officer for the Program of Assistance to Art Galleries and Museums states her acceptance of Beaver's resignation from the Eye Level Gallery. 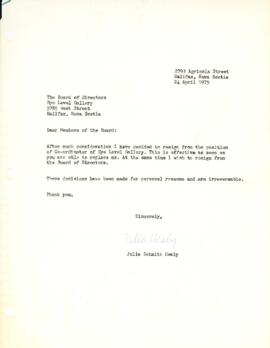 Item is a typed letter from Julia Schmitt Healy detailing her resignation from the position of Co-ordinator of Eye Level Gallery. 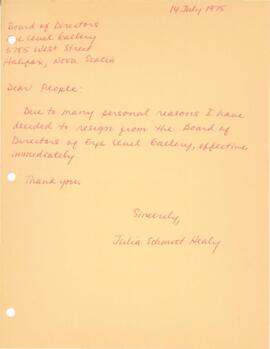 Item is a handwritten letter from Julia Schmitt Healy to the Board of Directors at Eye Level Gallery outlining her resignation from the board. 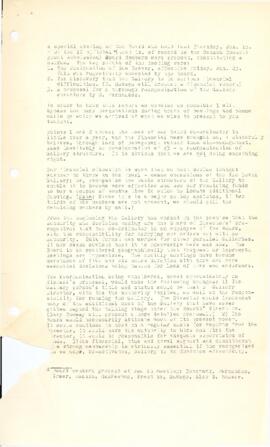 Report to the members of Eye Level Gallery

Item is a report sent to the members of Eye Level Gallery to make note of and bring awareness to the important issues that were discussed at the last Board of Directors meeting. Sue Beaver resigned from the position of Co-ordinator, which was accepted by the Board. Ron Savage presented on a financial report of the gallery's funds, which was a "discovery that the Gallery is in serious financial difficulties". Michael Fernandes presented a proposal for the structural reorganization of Eye Level Gallery.

Records of the Symphony Nova Scotia

This accession consists primarily of meeting minutes and agendas from the Symphony's Board of Directors and its Executive. There are also concert programs, rehearsal schedules, programming records for special events, annual reports and grant applications. 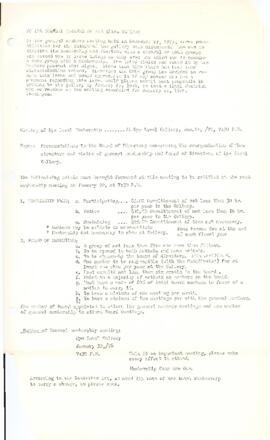 Recommendations to the board of directors

Item is a typed set of recommendations "concerning the reorganization of the structure and status of general membership and Board of Directors of Eye Level Gallery." This document reflects the results of a meeting held on November 27, 1975, when the gallery changed its membership structure to be a core group with a membership, which had affected fees, commitment and the Board of Directors.

Programs, correspondence, and minutes for the Board of Directors

File contains records relating to the 1988-1989 concert season of the Halifax Camerata Singers, including programs, minutes from Board of Directors' meetings, and correspondence. 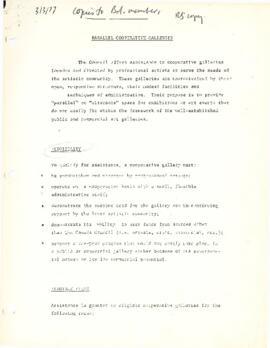 Item consists of a report entitled "Parallel Cooperative Galleries", which was created to assist artists in serving the needs of their artistic community. There are eligibility guidelines for this assistance, an outline for the operating, programming and salary expenses that are eligible to be assisted with, and a guideline for applications for assistance.

Fonds contains textual material, photos, artifacts, slides, paintings, and a video cassette created by the School of Agriculture, the College of Agriculture, and the Nova Scotia Agricultural College, between 1892 and 2012. Series include records of an administrative nature, departments on campus, buildings, photographs, student and faculty records, events, curriculum, and the institutions history.