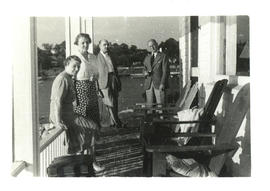 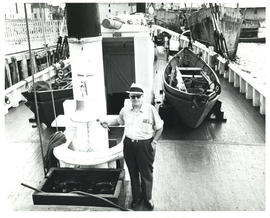 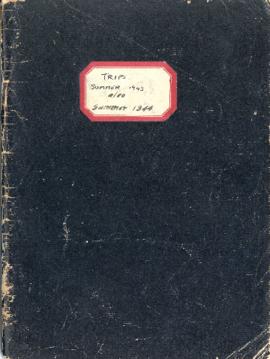 Eight people; One man and three women seated, three men and one woman standing behind in parlour. (copy #2)

Eight people; One man and three women seated, three men and one woman standing behind in parlour

One man wearing a winged collar, seated on a wicker chair with one young girl seated on its arm, and one woman holding a photographic booklet, seated on a carved chair; 3/4 pose

One man and one woman; bust

One young man, looking to the side; bust

One woman seated with three children at her side - a girl seated, a younger boy standing on her chair, and a still younger child seated on the arm of the chair between the others; 3/4 pose

The fonds consists of correspondence, financial records, sales and shipping operations, and vessel papers which document the business's operation between 1943 and 1983. Also included in the fonds are the records of the Lunenburg branch plant of Booth Fisheries Canada Company, Lunenburg Outfitting Company's president Honourable William Duff and Wilfred E. Knickle. Types of records found in the fonds are correspondence, cash books, cheque registers, fish sales and shipment books.

Fonds consists of legal papers and correspondence related to John W. Mill's administration of charitable funds for the poor in Mahone Bay and surrounding areas.

The fonds consists of records which document the business activities and interests of Adams & Knickle Ltd. from 1897 until 1968. Information contained in this fonds provides insight into the company’s role as a major fishing and shipping partner in the fishing and shipping industry in Nova Scotia. Also included in this fonds is information about the company’s international relations with the various agents engaged in this industry; the types and amounts of fish landed, processed, shipped and sold by the company; the many transactions involved in operating vessels; and various events that impacted on the company’s operations. The types of documents include: affidavits, agent accounts, agreements, catch journals, correspondence, damage claims, deeds, employment records, financial statements, fish sales records, fishing contracts, ledgers, notices of protest, port documents, sailing journals, time journals, vessel accounts and journals, vessel certificates, and vessel shares.

Fonds consists of administrative files, community involvement details, contract records, correspondence, employee records, financial documents, job estimates and job files, legal documents, photographs, plans, printed material, notes on solar heating projects, sound recordings, and union/association documents, as well as a series with material from the Murphy and Wharton Company. This material spans over 100 years from 1858 to 1987, and illustrates how business was conducted (meetings, annual reports, accounting and financial statements) and the relationship with the community (both charitable and with other businesses). There are also very detailed accounts of the work done by the company, from initial quotes through to project planning, blueprints, product literature, and finishing. Together the items demonstrate the organizational structure, management, and operations of the Powers Brothers company. These items provide insight into business operations in Nova Scotia throughout the late 19th and 20th centuries.

Drawing of the interior of the Bluenose II

File contains two copies of a drawing of the interior of the Bluenose II by Smith & Rhuland Ltd. The drawing includes a floor plan as well as a cross-section view of the interior, with labels and measurements.

Fonds contains a ledger from Vernon Simpon's general store in Simpson's Corner, Lunenburg County, Nova Scotia. The ledger book contains entries from 1929-1930. It was also used as a notebook, with miscellaneous notes entered until 1976. Fonds also contains a letter to Mrs. Vernon Simpson (Olive Eliza Simpson) from Robert H. Winters, Ottawa, November 30, 1953. The letter is a reply to Mrs. Simpson's letter about changes to mail delievery in Simpson's Corner, Lunenburg County, Nova Scotia. The file with the letter also contains an order form from Veribest Speciality Company and two copies of handwritten minutes of a Community Club meeting held on November 15, 1951.

Item is a microfilmed list of vessels that used the Lunenburg Marine Railway between 1922-1945.

File contains a bill of lading with an inscription on the verso dated 16 December 1892 indicating that the schooner sailed to LaHave, Nova Scotia.