Fonds consists of notebooks from the medical school at the University of Edinburgh. 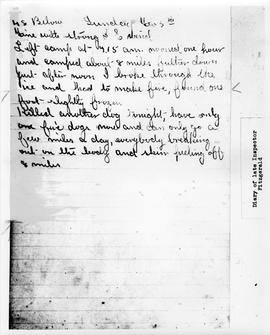 Photograph of a page from the diary of Inspector Francis J. Fitzgerald

Also includes photographs. Note in diary: "my journal not kept for nearly a year..."

This journal also includes 1 map of Cambridge,. England; a plan of Canterbury Cathedral and brochure titled a Guide to the Parish Church of S. Thomas the Apostle, Winchelsea

This is the last journal in the series, the last entry in this journal is August 2nd, MaccMechan died on August 7th, 1933.

This File consists a one journal by Mary Jean MacMechan, Archibald MacMechan's mother.

Reading notes on seminar on Romanticism

File contains a plain green notebook with red plastic spiral binding, used by Kenneth Leslie -- likely in the early 1940s (after 1936) -- for the purposes of compiling reading notes related to a seminar on Romanticism and the Romantic movement in literature. File largely contains Kenneth Leslie's densely-handwritten reading notes relating to his close study of Irving Babbitt's book 'Rousseau and romanticism'. File also contains a short bibliography of works on Romanticism (the latest entry dated 1936, with a reminder to purchase "the Modern Library giant -- Hawthorne" which was first published in 1937.

Series contains both the harmony workbooks created by Ellen Ballon during her early schooling as well as certificate letters issued from McGill University regarding her honorary degree and the scholarship program she instigated.

Transcriptions from John O'Groat's journal re. the death of Captain William Paterson

File contains transcriptions of entries from John O'Groat's journal regarding the death of Captain William Paterson, between November 23 and December 7, 1917.