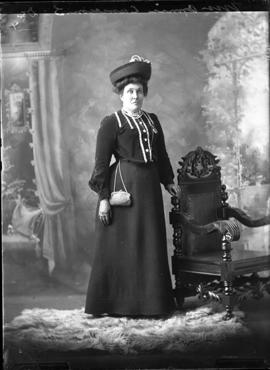 Item is one portrait photograph of Annie Cameron standing with one hand lightly resting near the arm of a chair.

File contains the digital scans of 7 pages from Vernon Kelly's photograph album. Mr. Kelly graduated from NSAC in 1965; the sheets contain photographs of himself and life on the Nova Scotia Agricultural College campus .

Series contains various biographical sketches intended for press releases, as well as scrapbooks of press releases about Ellen Ballon and her performances.

Series contains personal papers of and relating to Ivan Maxwell Gillis. Contents include copies of a scrapbook, copies of his degrees, newspaper clippings, letters of recommendation by others, an article on Gillis by Phyllis Blakeley, and a portrait of Gillis.

This series contains newspapers, magazines, clippings, photocopies, and a scrapbook relating to sheep and wool.

The file contains a scrapbook of newspaper clippings of agricultural activities around Nova Scotia from 1945-1949.

Sub-series consists of photographs, slides, and paintings that taken published between 1930-1989. These relates to the students, faculty, buildings, and activities at the Nova Scotia Agricultural College.

Series contains photographs of the students, staff, and faculty of the Nova Scotia Agricultural College. It was published in 1914.
Results 51 to 67 of 67