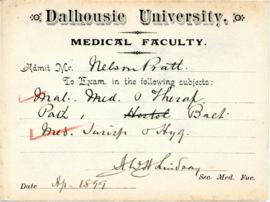 The Osler Medico-Historical Club of Halifax

File contains three copies of a news release from the office of the dean of the Dalhousie University Faculty of Medicine. The news release is titled "The Tragedy of Huntington's Disease." The file also contains four pages of rough handwritten notes.

Recording of an interview with Dr. John Szerb

File contains a cassette tape recording of Barbara Hinds' interview with Dr. John Szerb, a doctor from the Physiology Department at Dalhousie Medical School. The interview is about the effect of drugs on the bain in the late 1940's in Hungary. This is the first interview in a series of four. The file also contains a typed script of the intro and outro of the interview.

Recording of an interview with Dr. Barry Ross

File contains a cassette tape recording of Barbara Hinds' interview with Dr. Barry Ross, the head of the Department of Dermatology at the Dalhousie Medical School. This is the second in a series of four interviews. The file also contains a typed script of the intro and outro of the interview.

Correspondence with Derek Mann and other material

The First 40 Years : Women in Medicine at Dalhousie University : [manuscript]

File contains a manuscript called The First 40 Years: Women in Medicine at Dalhousie University, written by Barbara Hinds on behalf of Enid MacLeod, with corrections by Hinds.