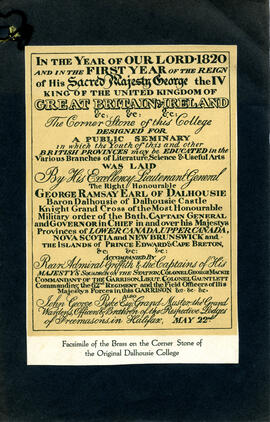 Statutes and Bye-Laws for the Regulation and Management of Dalhousie College, Halifax, N.S.

article in the Dalhousie Gazette

Faculty of Medicine, and the Halifax Medical College calendars

The History of Dalhousie College and University

Patterson, George - 'The History of Dalhousie College and University'

List of Persons Entitled to Become Members of the Alumni Association

Contains list of names, graduation dates, and hometowns at graduation

Report on the Constitution of the Dominion of Canada by Joesph A. Chapleau

Our Public Institutions as Sources of Impairment of Vision by J.A. Lippincott 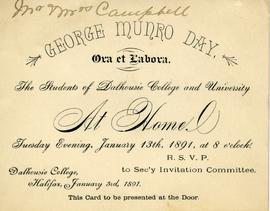 Item is an invitation to the 1891 Munro Day celebrations at Dalhousie University. The invitation apparently belonged to Mr. and Mrs. Campbell.

photocopied from the Dalhousie Gazette

photocopied from the Dalhousie Gazette

The American Journal of Psychology edited by G. Stanley Hall

Researches upon Cerium by W.H. Magee

Dissertation by A. Stanley MacKenzie: "On the Attractions of Crystalline and Isotropic Masses at Small Distances."

The Quebec Act and the American Revolution by Victor Coffin 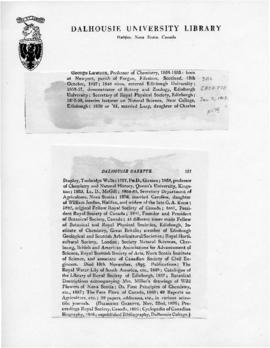 File contains materials related to George Lawson, a professor at Dalhousie College. The material includes a photocopy of a short biography of Lawson from the January 3, 1903 issue of the Dalhousie Gazette; an obituary notice for Lawson from the Proceedings of the Nova Scotian Institute of Science, volume IX, session 1895-1896; a photocopy of a page from the Inaugural Lecture Delivered at the Opening of the Third Summer Session of the Medical Faculty of Dalhousie College and University on April 11, 1870 by Lawson; and a pamphlet of testimonials in favour of Lawson from 1874.

On the Calculation of the Conductivity of Aqueous Solutions containing Sodium Chloride and Potassium Sulphate by E.H. Archibald

A contribution to the study of water solutions of some of the alums by Margaret E. MacKay and Harry C. Jones

The Ethical System of Adam Smith by Ethel Muir