This file contains two photocopied pages of a program for the banquet of the 10th annual meeting N.S.A.C. Alumni association. - Accession includes school songs, names of toasters, and menu for the evening. - Annotated on back “Original with Mrs Bill Jenkins : January 12, 1989”

Pamphlet for the Nova Scotia Agricultural College 94th convocation held on May 7, 1999, 2 pm, at Truro, NS.

A notice to all MacDonald College graduates

This file contains 1 program concerning the annual reunion, on October 5, 1963

A program for a Children's Literature and Book Display at St. Anne's Elementary School University College of Cape Breton

An invitation to Autumn Assembly. October 28, 2004

This item is a program for the Nova Scotia Agricultural College's 75th Anniversary in 1980.

Pamphlet regarding the award winners of the Nova Scotia Agricultural College Autumn Assembly held on October 22, 2003.

Pamphlet regarding the award winners of the Nova Scotia Agricultural College Autumn Assembly held on October 24, 2001.

File contains a program and two clippings of advertisements for the concert.

File contains a program and advertisement for a concert by Symphony Nova Scotia, conducted by Georg Tintner, in collaboration with the First Baptist Church Choir, directed by David MacDonald; Georgian Singers of Halifax, directed by Dr. Walter Kemp; Halifax Camerata Singers, directed by Jeff Joudrey; and Truro Cantabile Singers, directed by Jeff Joudrey. The file also contains a translation for the text of Brahms' German Requiem, Op. 45 and two newspaper reviews of the concert. The concert also included a performance of Peter Lieberson's Viola Concerto No. 1, featuring Steven Dann as the soloist.

File contains the order of carols for Halifax Camerata Singers' performance on CBC Information Morning as part of a special program for raising supplies and funds for the Food Bank. Twenty out of twenty-five members of the choir were in attendance.

File contains a program and outline of the event for a performance by the Halifax Camerata Singers in the Great Hall of the University Club at Dalhousie University. The file also contains a memorandum from Bertrum MacDonald to Jeff Joudrey with details about the venue.

Series contains records, pamphlets, invitations, and newspaper clippings regarding events at the Nova Scotia Agricultural College campus between 1992-2007. It is arranged into five subseries, convocation, autumn assembly, open house, founder's day, and the opening of the centennial amphitheater.

File contains a program, two copies of a poster, blank door prize forms, and newspaper clippings of advertisements for a concert by the Halifax Camerata Singers at St. Andrew's United Church in Halifax, Nova Scotia. The concert featured sacred and secular choral music. 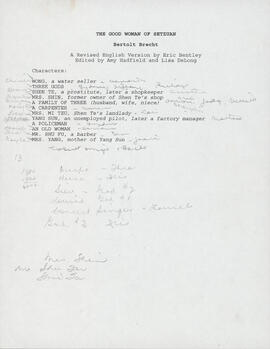 Item is a cast list for Dalhousie Theatre's production of The Good Woman of Setzuan. The item has a list of characters from the production with penciled-in notes about who played which character.

Celtic mass for the sea

File contains a program for a concert by the Halifax Camerata Singers, performed as part of the Centre Bras d'Or 10th Annual Festival of the Arts, presented by the University College of Cape Breton. The performance featured Scott MacMillan's "Celtic Mass for the Sea".

This fonds consists of records created and collected by both the Canadian Puppet Festival and the Chester Theatre Council related to the management of the Chester Playhouse, including financial records such as statements, budgets, balance sheets, and invoices; press releases; photocopies of reviews; advertising and marketing records; personnel files; construction and maintenance records; meeting minutes and agendas; reports such as attendance records and box office sales; grant applications and fundraising files; correspondence; and event files, including programmes, tickets, and other promotional materials.

File contains a program, flyer, and two posters for a concert by the Halifax Camerata Singers. The file also includes newspaper clippings of reviews of the concert.

Continuing education for all / Teresa MacNiel

File includes the conference agenda for Adult education: a northern perspective conference sponsored by the Canadian Association for Adult Education and the Yukon Department of Education.

2 copies of the same program

File contains program for special convocation for the opening of the Sir James Dunn Building.
Results 1 to 50 of 835