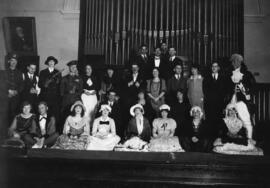 Item is a photograph of the Dalhousie University theatre group wearing costumes and sitting or standing on a stage. 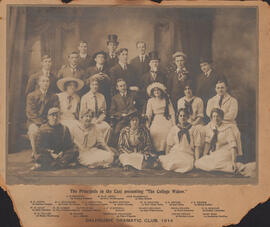 All the Nice Girls and The Broken Ring

The Marriage of Figaro

Deaccessioned 12 copies of this opera's program.

Programs for the Moncton, New Brunswick performance of the Tales of Hoffman

Programs for the Halifax, Nova Scotia performance of the Tales of Hoffman

The Canadian Opera Company in "Barber of Seville"

The fonds contains copies of programs for operas performed or hosted by the Nova Scotia Opera Association, as well as draft copies of those programs. It also contains business correspondence, annual reports and its notice of incorporation.

File contains an annotated flyer. Ellen Ballon is mentioned in the biographical note on Heitor Villa-Lobos.

File includes a program for an Ellen Ballon concert in New York (December 21, 1945) and an advertisement card for three concerts by Ellen Ballon in April 1945.

Programmes of performances directed or choreographed by Alan Lund

Programme for the 1942-1943 season of the Royal Alexandra Theatre

Programme for the 1962-1963 season of the Canadian Opera Company

File contains a program for the 1962-1963 season of the Canadian Opera Company. Alan Lund was the choreographer for the company's production of Rigoletto by Giuseppe Verdi, October 15-26, 1962.

Fonds consists of sheet music, scripts, and programs from different musical plays that Blanche and Alan Lund performed, directed or choreographed. Also includes audio reel-to-reel and video tapes of some of the performances.

File contains a program for a concert featuring the Halifax Camerata Singers, Linda Verbier, David Murray, Pamela MacDonald, the Niagara Brass Ensemble, George Maxmann, Scott MacMillan, and Olga Milosevich. The concert included the world premiere of "The Three that Seek My Heart" by Scott MacMillan. The file also includes an account of tickets sold by the Halifax Camerata Singers for the concert and two newspaper clippings. The concert celebrated the fifth anniversary of the Saint Cecilia concert series in Halifax, Nova Scotia.

File contains a program and advertisement for a concert by Symphony Nova Scotia, conducted by Georg Tintner, in collaboration with the First Baptist Church Choir, directed by David MacDonald; Georgian Singers of Halifax, directed by Dr. Walter Kemp; Halifax Camerata Singers, directed by Jeff Joudrey; and Truro Cantabile Singers, directed by Jeff Joudrey. The file also contains a translation for the text of Brahms' German Requiem, Op. 45 and two newspaper reviews of the concert. The concert also included a performance of Peter Lieberson's Viola Concerto No. 1, featuring Steven Dann as the soloist.

File contains two programs for two performance of Handel's Messiah by Symphony Nova Scotia, conducted by Georg Tintner, with the Halifax Camerata Singers and Truro Cantabile Singers, directed by Jeff Joudrey. The concerts took place at the First United Church in Truro, Nova Scotia and at the Rebecca Cohn Auditorium in Halifax, Nova Scotia. The file also includes a newspaper review of the concert.

File contains a program and newspaper clippings from a performance by the Halifax Camerata Singers in collaboration with the Truro Cantabile Singers, performed as part of the Saint Cecilia 1993-1994 concert series.

File contains a program and poster for a concert presented by the Confederation Centre for the Arts. The program included performances by the Christ Church Cathedral Trebles from Fredricton, New Brunswick, conducted by Jeffrey Campbell, and the Halifax Camerata Singers, conducted by Jeff Joudrey and accompanied by Diana Torbert.
Results 1 to 50 of 1939