Item is a newspaper clipping about the death of Frederick James Dawson. The article was published in the Moncton Transcript on January 10, 1959. 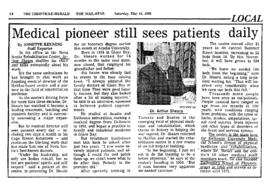 Clippings related to the career of Arthur H. Shears

Item consists of clippings related to the career of Arthur Shears and his work with the Nova Scotia Rehabilitation Centre, drawn from the Chronicle Herald and Mail Star, between 1977 and 1990.

This file consists of correspondence, newspaper articles, bulletins and brochures relating to the CUPE local 1392 strike at Dalhousie.

File consists of photocopies of newspaper clippings that feature the Ecology Action Centre or for which EAC provided information. File also includes a copy of their stance on environmental election issues relating to environmental protection and non-refillable beverage containers from the 1974 Nova Scotia provincial election.