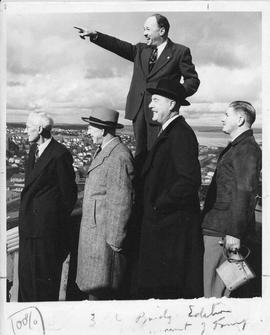 Item is a photograph of Henry Hicks, premier of Nova Scotia; Alex Scott, resident engineer in charge of construction; A. Murray MacKay, chairman of the Halifax-Dartmouth Bridge Commission; Colonel S. C. Oland; and Leo J. Burke, bridge manager, on an official inspection tour to view the progress being made on the construction of the Macdonald Bridge in Halifax. They are standing on the west main tower of the bridge and Hicks is pointing at a sight of interest.