Dalhousie, Lord - 'Trustees for Youth and the Future'

Seth, James - 'Philosophy as the 'Science of Sciences''

Item is an issue of the Dalhousie Gazette published in May, 1912.

George L. Trueman's address at the inauguration of A.E. Kerr

Binary Pulsars and Einstein's Gravity: The Layman's Guide to a Modern Astrophysical Experiment

Manipulating the Solid/Liquid Interface - From Sensors to Lithography

Two articles/lectures by Murray MacKay: "Insulin Therapy at the Nova Scotia Hospital" (1944) and "A Survey of Hypoglycaemic Shock Treatment in Dementia Praecox" (n.d.).

In The Dalhousie College Gazette, vol. 2, no. 1

Public panel on a nuclear power plant in Nova Scotia 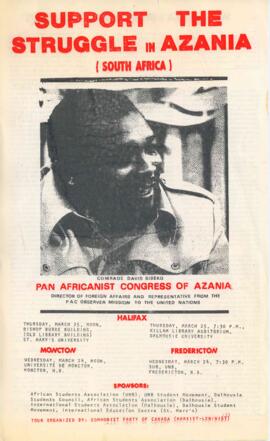 Support the struggle in Azania : [poster for lectures by David Sibeko of the Pan Africanist Congress of Azania]

File contains a poster for lectures by David Sibeko of the Pan Africanist Congress of Azania as part of a tour organized by the Communist Party of Canada (Marxist-Leninst). The tour was sponsored in part by the Dalhousie University African Students Society.

May 11; September 2 (convocation address by A. Michael Ramsey included in file

address given during cornerstone ceremony, photocopy from "An Introduction to the History of Dalhousie University"

Kerr, A.E. - Address - 'Some Famous Lawyers and Their Contribution to Theology'

Address at the inauguration of A.E. Kerr.

Stanley, Carleton - President's Address at the Opening of Session 1937-38