Articles and research material about the San Rafael

File contains correspondence with Bill from Shipowners Assurance Management Ltd, A & C Black Ltd, ; a photocopy of "Big battles with the Sea: Twenty-Seven Days in Open Boats" by H. J. Shepstone; pages from "Our Sure Shield! About the Day's Work in the Navy" by J. S. Margerison; typed drafts of "The other boat" and "San Rafael's last trip round Cape Horn"; photocopies of drafts of "Ol'd Grandpa" and "The other boat"; a bibliography and research material for a talk given to the Antiquarian Society called "Aids to Navigation"; a typed draft of a talk for the Antiquarians called "Survival in the Roaring Forties" which is about the San Rafael; and a photocopy of "Saga of the 'San Rafael.'"

Barbara Hinds reports from McNab : An island caught in the crossfire : [article in the Mail-Star]

Item is a newspaper article entitled "Barbara Hinds Reports From McNab--An Island Caught In The Crossfire," published over two pages in the March 2, 1967 issue of the Mail-Star. The article is about the history of McNab's Island, its inhabitants, and its potential future. The article includes photographs of old cannons, as well as Mr. and Mrs. Ernest Arthur Farrant, who are two inhabitants of the island. The photographs were taken by Barbara Hinds.

Council of Europe and the European Court of Human Rights

Subseries consists of Ronald St. John Macdonald's records regarding his involvement with the Council of Europe and the European Court of Human Rights. Subseries contains periodicals, reports, press releases, photographs, and other materials. 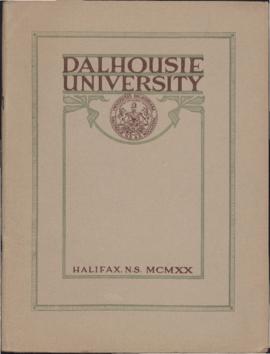 Draft of an article about McNab's Island

Item is a typed draft of Barbara Hinds' article entitled "Barbara Hinds Reports From McNab--An Island Caught in the Crossfire," which was published in the Mail-Star in March 1967. The draft is typed on tissue paper and includes many corrections written in pencil.

File contains a typed draft of a talk called "Emigration/Immigration in Victorian Times," photocopies of images to accompany the talk, and a few pages of handwritten notes.

Draft of talk to the Antiquarian society about old Dartmouth

File contains a typed draft of an essay about Old Dartmouth. The essay is for the Antiquarian Society. The essay is typed on lined notepaper.

From College to University - D.C. Harvey

Materal for talk to the Antiquarian Society about Eskimo clothing

Material for talk about aids to naviagtion

File contains a typed draft of a talk for the Antiquarian Society called "Aids to Navigation," as well as photocopies of images to accompany the talk which are mounted on numbered sheets of paper.

Material for talk about Enos Collins

File contains a typed draft of a paper about Enos Collins with corrections; a printout of an email from McKay to Sandra; photocopied portraits of Hallet Collins, Enos Collins, and the Hon. James Fraser; and a photocopy of a photograph of Gorsebrook, the former home of Enos Collins. The photocopies are from Nova Scotia Archives and Records Management. The paper is possibly a talk given to the Antiquarian Society.

File contains two drafts of papers about Lady Frances Wentworth and pages of handwritten notes torn from a notebook.

Material for talk about tributes, honours, and prizes

File contains a typed draft of a paper about tributes, honours, and prizes with corrections; photocopies or magazine clippings of photographs which accompany the paper and are mounted on numbered sheets of paper; and some photocopied research material. 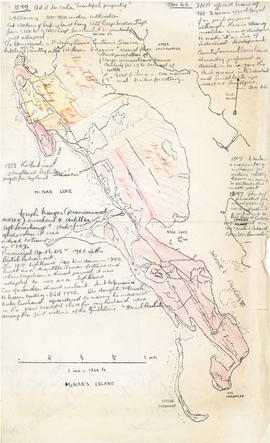 Paper about St. Michael and All Angels, correspondence, and information sheet

Photocopy of draft about brass rubbings

File contains a photocopy of a draft of an article about brass rubbing. 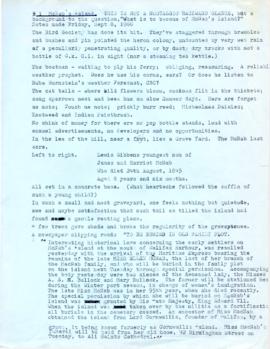 Item is a collection of notes about McNab's Island that are typed on blue paper with corrections written in pencil. The notes are about the history of the island.