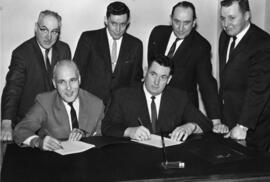 This fonds contains minute books of meetings from 1946-1972, three filed employee grievances ( Janette Roy, Thelma Burgess, and Helen Haskem), conciliation board submissions and papers, arbitration board submissions and papers, reference material including newspaper clippings and miscellaneous reference material. The miscellaneous reference file contains receipts, an application for membership with the United Textile Workers of America, an efficiency report for 1969, and a record of proceedings and decision of board referees. As well this fonds includes collective agreements from 1948-1973, and miscellaneous correspondence.